My First Impressions with Spotify Running

Last month, Spotify announced a handful of new features geared toward “bringing you the music you love when you need it most.” With the impending launch Apple Music, it makes sense that Spotify would be looking for new ways to differentiate themselves from their competitors.

Most of the announced features felt inconsequential, but there was a fair amount of buzz around Spotify Running. The new functionality is meant to deliver recommended music, genre-specific playlists, and curated mixes that match the tempo of your run.

I had planned on taking it for a test drive when it launched, but a pair of missing headphones got in the way of that plan. Once that situation was resolved, I fired up my Fitbit app, started tracking my workout, and went over to the Running section of the Spotify app. It wasn’t immediately obvious to me what to do next — I thought there would be a call-to-action to determine my tempo, but that wasn’t the case. The top of the screen said “start running and the music matches your tempo,” so I started running. Nothing happened.

I looked over the playlist options and selected “Recommended For You” instead. That brought up the tempo detection screen (oh hello, you look helpful). 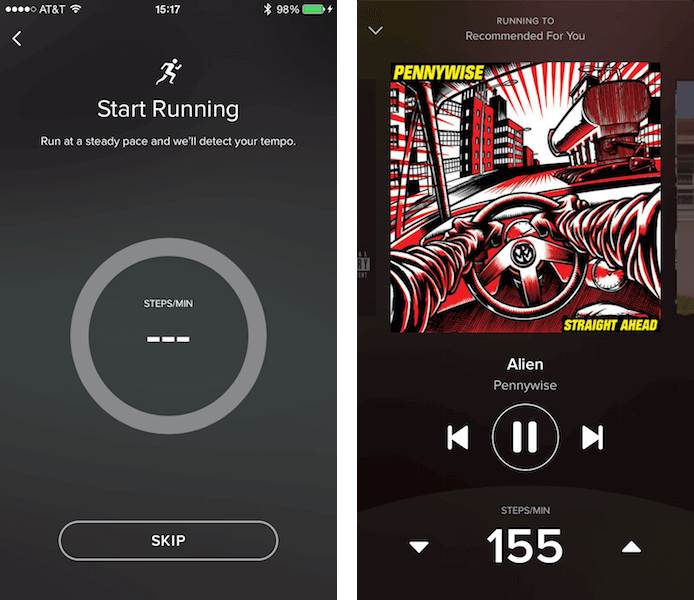 I started running, the app set my tempo to 155 steps/minute, and Coheed and Cambria were rocking out mid-song.

This wasn’t a very a long run, but the music Spotify selected felt right for my pace, and the recommendations were pretty spot on (Pennywise, Rise Against, blink-182, Flogging Molly, The Killers, Eminem, Jimmy Eat World, The Offspring, Foo Fighters). I knew the songs Spotify selected but probably wouldn’t have thought to include them in a running playlist.

Having read mixed reviews of the feature, I wasn’t quite sure what to expect. Once I figured out how to get it working, I found the experience to be (dare I say) fun. Running is hardly my favorite physical activity, but I feel like Spotify Running might go a long way to making my workouts a little more enjoyable.