While I try to keep up with the latest tech toys and gadgets,  I’ve never found much interest in is fitness trackers. I’m not an avid runner, so the idea of an expensive wristband to track my location didn’t have much appeal, and on the other end of the spectrum, I never understood the need for a glorified pedometer.

(On the subject of wearables, while I also have very little interest in owning an Apple Watch any time soon, at least that got my attention.)

All of this changed recently when I celebrated my birthday and received this as an unexpected gift:

My first thought was “okay, so now I can track how many steps I take in a day.” I like data, the data is about me, so sure, I can get on board with that. As I examined the box though, it seemed Fitbit was offering as many promises as a politician running for office.

Well now you’ve got my attention.

I unboxed my new toy, went through the setup process (a breeze), and starting walking (okay, I’ll admit I ran a little) around my apartment. I checked my wrist to monitor my heart rate and count my steps. So far, so good.

I looked over the food and water tracking and decided to leave those until the following day. It was time for bed and I read that unlike previous Fitbits, the new models didn’t require putting the device in sleep mode before dozing off. I went to sleep curious about what the data would look like in the morning. 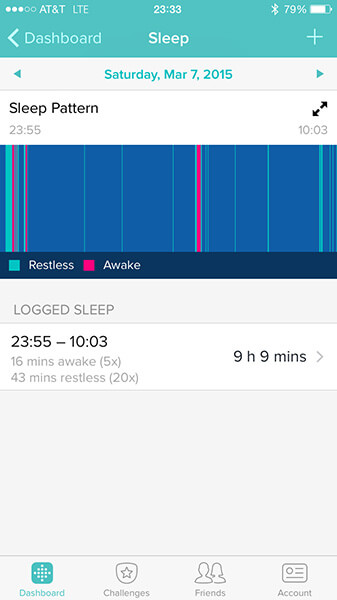 I’ve always been fascinated with the idea of better understanding my sleep habits, and have tried a few iPhone apps with varying levels of satisfaction.

While this was only one night, I was pretty impressed with the quality of the data and how well it matched what I remember of my night’s sleep. (The next few nights all confirmed that the sleep monitoring on the Fitbit is an extremely capable feature on its own. I did have one occasion where the Fitbit thought I was napping when I took it off for a bit, but that was easy enough to remove that in the app.)

When breakfast time came around, I thought it would be a good opportunity to start tracking my food and water intake.

The food logging system is extremely thorough, and I’ve been pleasantly surprised by the number of common food items and brands that are already present in the system (there’s also a barcode scanner that makes the process even easier). I’ve had to get a little creative when eating out at restaurants, but finding comparable items in the system is never very difficult. I have experienced some considerable performance hiccups when in the food section of the application that I haven’t seen in other sections, but it’s still plenty usable.

The section for adding water is incredibly quick and simple as well. No bells and whistles here, just like it should be. 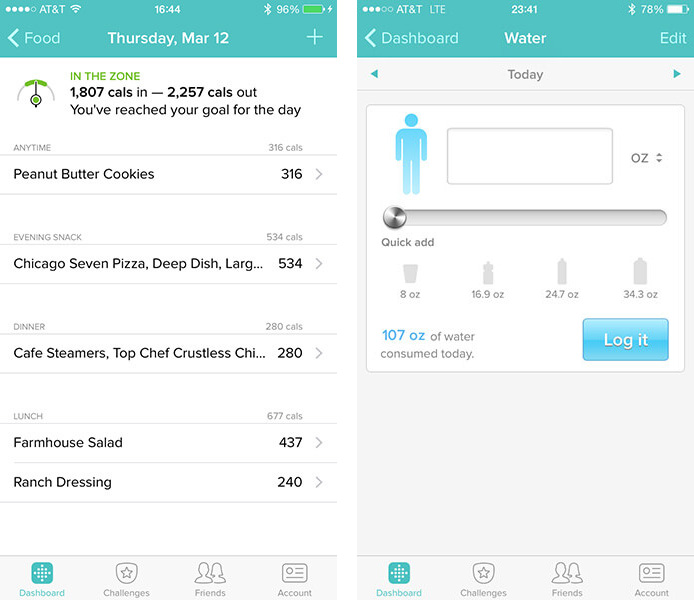 As for the fitness capabilities, having tested the various data trackers and Fitbit’s MobileRun feature (uses your phone’s GPS and records time, pace and distance for your runs/walks), I’ve found the reporting to be accurate and pretty damn fascinating. With warmer temperatures finding their way to Chicago, I’m excited to get the bike out and see how the Fitbit handles tracking cardio exercises that don’t include steps.

Two other features that deserve a quick mention here are the Caller ID and silent alarm, as they work well and are nice touches to an already capable device.

So it’s all good then?

Well in my experience, yeah, it pretty much is. I’ve seen a fair amount on the recall of previous models and know that some people are still having irritation problems with the new line of Fitbits. On my first day, I noticed some minor discomfort where the LEDs that monitor heart rate made contact with the skin, but after loosening the strap (Fitbit recommends that you wear the band loosely enough that it can move back and forth) there haven’t been any issues.

I highly recommend (and have been recommending) the Fitbit Charge HR for anyone thinking about a fitness wearable. If you’re the competitive type and have friends with Fitbits, the social features provide some excellent motivation. I don’t always hit my 10,000 steps, and sometimes my desire to eat that leftover slice of deep-dish pizza is stronger than my desire to stay in the “green zone”, but after a few weeks of use, the Fitbit Charge HR has certainly won me over. 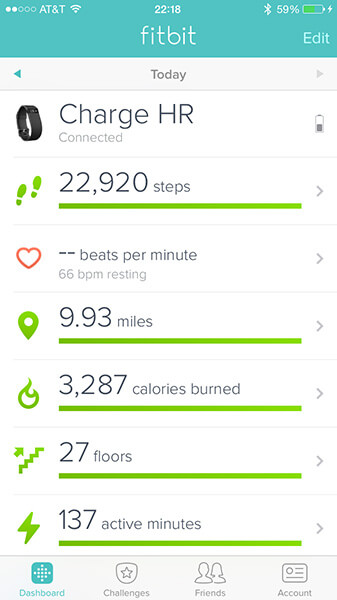